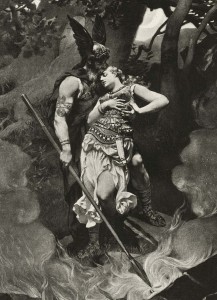 22 minutes and 31 seconds is what it takes to tell an epic (and weird) tale about Vikings, Martians, Odin and a dragon named Brunhilde, accompanied by some extremely groovy stoner/doom/psychedelic/folk rock from Eli Davidson’s one man band From Deep Space. So sit back and let him tell you his tale…

The song starts out a little ’folk-ish’, the vocal performance is typical story-telling style and is a little one dimensional in the first 6 minutes, not that it is a bad thing at all, but after awhile I can’t help but feel that the track is dragging its feet and I want something to happen and luckily something does happen! After the victory over the Martians and the following feast (6 minutes and 25 seconds into the track) it drops down into slow dark doom and I love it, the track needed this change, it was becoming too merry for my taste. The track really blooms out after this point and it is no secret that this kind of music lies closer to my heart. Overall it is 22 minutes well spent and you can get this one track album fairly cheap on Bandcamp (free if you so choose).

Song description by Eli Davidson:
”A Bard’s Tale” by From Deep Space, off the one song album: Brunhilde. The song relates a tale of Lemurian Vikings out to sea that are called home by songs sung from within Mt. Shasta by their Queen Dujah, and also by the Captain’s red-haired love, Maija. They are called home because their village is under attack by men from Mars. While the battle ensues, a lone red dragon named Brunhilde, who has clashed for years with the Lemurian people yet remains fascinated by them, watches from high above and sees that a peace should be made with the Vikings in order to combat a common enemy: the Martians. However, when Brunhilde approaches the Lemurian Vikings, she finds that they are anything but ready to make peace, having their ears clogged with bloodlust. Finally, after fighting for a brief while, the Captain hears Brunhilde’s words and realizes she prays to their god Odin, and that she wants to make peace. The Lemurian Vikings and Brunhilde go on to celebrate their newfound peace with a feast.”

All music and lyrics written by: Eli Davidson

Artwork in the video: